I was checking the value of my Berkshire Hathaway holding recently. When doing so, I came upon some notes I had written several months ago, about its leader Warren Buffet.

Just for the record, here’s what a chart of this company’s B shares look like the past 20 years: 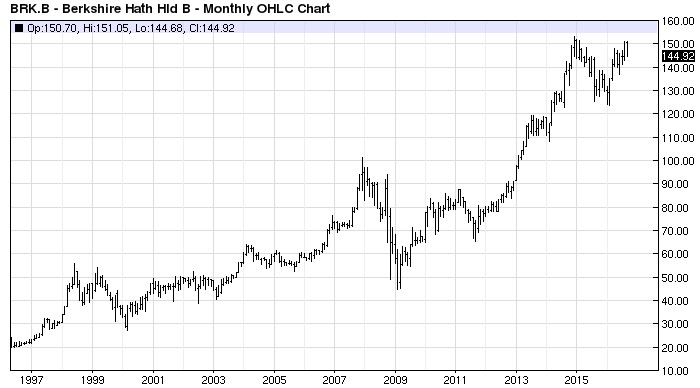 As the owner of a small business, I have always been enthralled with the wisdom of Warren Buffet, not just because of the incredible wealth he has amassed, but also because of his unique perspective on things.

Each year I devote some time to check Berkshire Hathaway’s Annual Report and read Chairman Buffet’s remarks. I’ve also enjoyed reading anything his colleague Charlie Munger (whom Buffer refers to as his business partner) writes, too.

After reading through the past year’s annual report, and some reflecting on what I’ve read from Buffet and Munger over the years, I compiled a few lessons I’ve taken away from their wisdom.

But he’s more than that, and I am writing here about some of his other principles and traits. They may change how you think about your business.

1. Know your own track record

Berkshire Hathaway’s annual report regularly features a table summarizing the performance of the company for the past 50 years since the current management, led by Buffet, took over.

The returns are impressive, to say the least. But what’s even more remarkable to me is the consistency throughout the decades.

There were ups and downs, of course. But in general, you see consistent, steady progress through the years.

As a farmer, you might find it interestinging to lay out your own track record on an annual basis. While Berkshire Hathaway expresses its two key figures as per-share book value, and per-share market value, you can determine what you want to measure. That might include gross and/or net income, net assets, or something else that you find relevant. How you measure the financial success of your business is up to you.

A simple spreadsheet that you can look at once a year, or perhaps twice or even quarterly, can be revealing. You can see the long-term trend. You can review your performance over time in a simple, basic manner.

The results might surprise you. I talked about this at some of my seminars. At one, a farmer in the crowd quietly drew a graph showing his own net asset growth since he launched it from a zero start in 1989. He compared it with Berkshire Hathaway’s average returns since 1989. For annual per cent gains, the farmer beat Buffet. Impressive!

As for me, I received a certain satisfaction from reviewing my company’s statistics when I did this exercise recently. I went back to 1981 when I launched DePutter Publishing Ltd. The data and charts show nothing like Buffet’s astounding results. But at least the trend has been gradually and steadily higher over time, notwithstanding some down-years.

It confirms my persistence has paid off. It helps me keep the tough years in perspective.

It also serves to remind me that after a particularly great year, it’s wise to be cautious about expecting that exceptional return to continue.

2. Keep a positive (yet realistic) attitude

In some of the annual reports, 2015 included, Buffet talks a little about his take on economic conditions and the future of America.

He is unequivocally and unapologetically upbeat.

He says, “the babies being born in America today are the luckiest crop in history.”

He makes the point that the families living in his upper middle-class neighborhood (yes, Buffet still lives in a relatively modest home in a modest area) enjoy a living standard better than that achieved by the ultra-rich John D. Rockefeller Sr. at the time of Buffet’s birth.

Buffet doesn’t buy into the misery themes sold by political parties, noting that “candidates can’t stop speaking about our country’s problems, which of course, only they can solve.”

I appreciate Buffet’s somewhat contrarian positivity. I think it’s worth taking a step back in our own lives and businesses and asking ourselves:

– What is good about right now?

– What opportunities are offering themselves to me, at this time?

Sometimes the general population seem to like to complain, or worry, or talk about everything that is going wrong.

Farmers might be prone to that too. And legitimately so. After all, the commodity markets and other aspects of work and life in agriculture can be incredibly tumultuous.

However, a positive attitude can not only help us appreciate the business we’re in, it can help us make sound business decisions and avoid acting out of fear or panic when times get tough.

Of course, it’s important to be realistic too. I’m not advising being idealistic or blind to risks.

The message is this: If Buffet had focused over the years on all that was wrong about America and the world – and all that could conceivably go against him – he would not have forged ahead with the work and decisions that took his business to the heights it reached.

3. Take time to think and learn

In our fast-paced culture, it seems like we’re expected to form opinions, make our minds up, and take action without taking the time to learn, think, and reflect.

We live in an era of 6 second soundbites, 140 character tweets, and internet articles we scroll through instead of actually reading.

Both Warren Buffet and Charlie Munger are different. They take their time. They think.

They are not swayed by unsubstantiated opinions or group-think.

Over the decades Buffet has seen many, many people investing in the latest fad or rushing to exit their holdings in panic. Buffet never got caught in speculation, nor was he driven out by fear. He stuck to the teachings of Benjamin Graham, a sage investor who is best known for developing guidelines of “value investing.”

Michael Olsen, writing for the Motley Fool Canada after attending an annual meeting for Berkshire, said he learned simple yet hard-to-practice lessons from both Buffet and Munger.

Among these, the practice of ongoing curiosity and constant learning.

On the latter, Munger is quoted as saying: “I insist on a lot of time being spent, almost every day, to just sit and think. That is very uncommon in American business. I read and think. So I do more reading and thinking, and make less impulse decisions than most people in business. I do it because I like this kind of life.”

Munger calls him a “learning machine.”

– How much time do I devote to thinking and learning?

– Is there any area in my life where I would like to create more time for thoughtful reflection?

– Can I set aside some time toward studying and investigating a certain issue that interestings me?

This can be time well spent.

4. Look for the chances you might regret not taking

Buffet has made many mistakes and admits to them. It’s an important lesson to us all that with great success comes errors and losses along the way.

But it’s especially interestinging which mistakes Buffet views as the worst.

To him, his biggest errors involved missed opportunities.

Yes, in hindsight his primary errors were his decisions to not buy into what turned out to be successful companies.

Buying the wrong ones actually turned out to be his lesser errors.

It’s impossible in the farming business – or any business – to get through unscathed. We’re all going to make mistakes. Lots of them.

But there are mistakes, and then there are real regrets.

I’ll tell you one chance I’m glad I took.

At the time, some people thought I was crazy. My wife was pregnant with twins. We had a mortgage, and a future to think of. But I had an idea and believed we could make it work. So we gave it a shot.

Buffet was labelled the richest man in the US in 2008. He is said to be worth over $64 billion (probably significantly over). Buffet is 86 years old and Munger is 92 as I write this. They are both still incredibly sharp and still running what could be termed the most successful company in the world over the course of the past 50 years.

That in itself is inspirational.