Manitoba farmers planted 2.3 million acres of soybeans in 2017, a 40 per cent increase from 2016 that Manitoba Pulse and Soybean Growers Executive Director Francois Labelle described as a surprise and one of the highlights of 2017.

For one thing, it means there are a lot more soybeans in the province.

The record acreage produced a record crop in the province.

But what this past year’s big jump in Manitoba soybean planted may also signify is the end – or at least the slowing – of a multi-year upward trend. 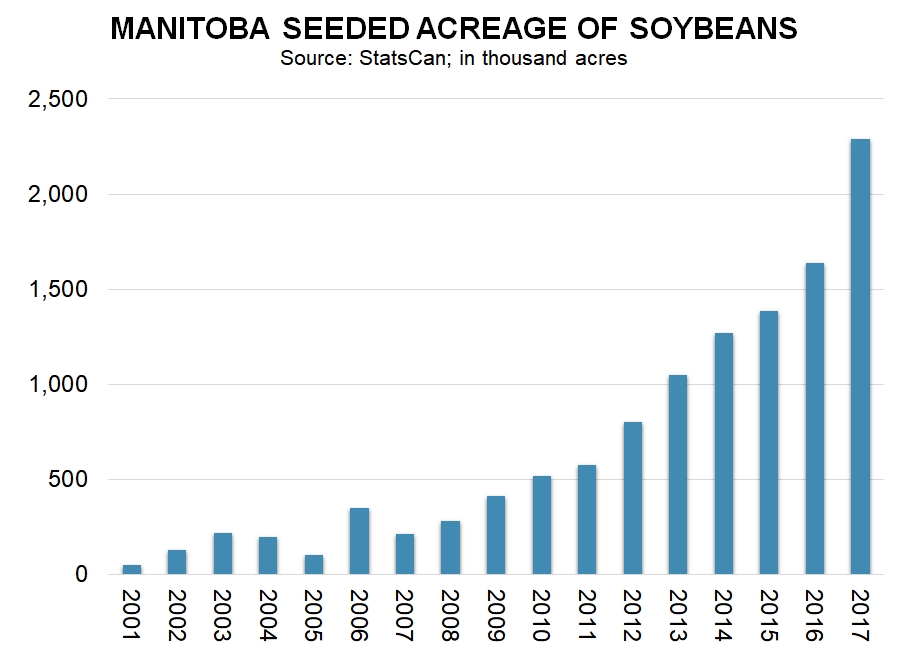 As the acreage numbers certainly suggest, there’s plenty of interest in growing soybeans in Manitoba, and given that given that finding more soybean ground is as simple as switching out of canola for example, there would seem to be more upside potential.

But it is important to bear in mind that it oftentimes only takes one bad experience for some farmers to cut back or even abandon some crops altogether. Due to some hot, dry weather this past growing season, the average Manitoba soybean yield came in at an underwhelming 36.1 bu/acre. That’s well down from the previous year’s record high of 41.3 bu and represented the lowest average yield in the province since 32.3 bu in 2014.

Perhaps not surprisingly, a DePutter survey conducted in the fall turned up some souring on soybeans in Manitoba (and even more so in Saskatchewan), with various growers indicating they were planning on cutting back on soybeans in 2018.

Not coincidentally, some of the biggest gains in Manitoba soybean area have also come as market prices have been strong relative to various other cropping choices. The problem is, lots of other farmers in other countries have recognized those attractive prices and jumped on the soybean bandwagon as well. In 2017, U.S. farmers planted just about as many soybean acres as corn, and long-range projections released by the USDA late last year suggest the two crops will be even at 91 million acres in 2018, with soybeans pulling ahead by 2019.

In South America, mostly good weather so far in the 2017-18 crop year has some folks thinking that Brazil and Argentina could come close to replicating their combined nearly 172-million tonne output the previous year.

Admittedly, world soybean demand remains strong, but with nearby futures prices hovering around US$9.50/bu, it seems the supply side is comfortable. If South America pulls off another big crop this spring, and if the 2018 U.S. crop gets off to a good start, lower prices yet are a possibility.

2018 may be the year that western Canadian soybean area, and quite possibly Manitoba area, sees its first decrease in a decade.

Want to keep up on all the fundamental factors and other indicators for soybean prices? Try out our weekly Market Advisory Service newsletter, which offers ongoing market opinions and sales recommendations.