“Argentinian production of soybean is to hit a five-year low of 52 million tonnes in the 2017/18 crop year, as yields are expected to fall 13% to 2.9 tonnes/hectare, according to a weekly market note by the Rosario Board of Trade.”

Production estimates for the world’s third largest soybean producer are drifting lower, but there’s still plenty of weather and uncertainty ahead.

The ongoing dryness in Argentina has obviously captured the market’s attention, with Chicago soybean futures rallying since about mid-January and the nearby March contract busting through the US$10/bu mark today.

Indeed, it still quite possible that any production losses in Argentina will be more than countered by a bigger-than-expected crop in Brazil.

In fact, the latest world supply-demand estimates from the USDA – released earlier this month – actually increased the expected combined output of the two countries. Although projected Argentine soybean production was reduced 1 million tonnes from December to 56 million, the size of the Brazilian crop was revised 2 million tonnes higher to 110 million.

Admittedly, the USDA’s January estimate of Argentine production remains well above Rosario Board of Trade. It’s possible the USDA will lower its forecast in February. But if the weather stays good in Brazil, where some early soybean harvesting is already underway, it’s also possible Brazil’s crop estimates get bigger, too. 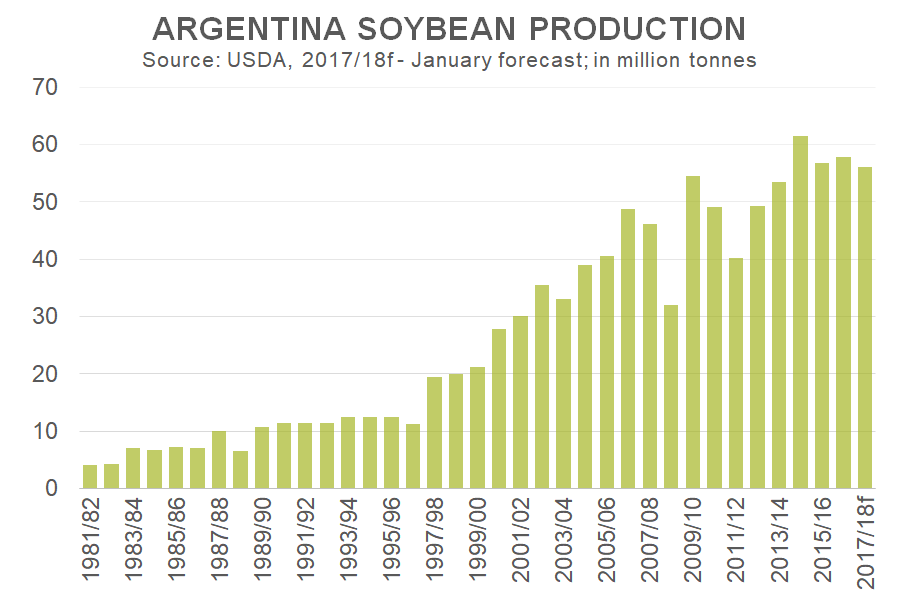 Remember also that it’s still early in the season in Argentina, with the planting of double-crop soybeans just finishing up about now. Any sudden turn in the weather there still has potential to increase the country’s production potential, regardless of the harm that already done to the full season beans that were planted back in December.

Bigger issue is US weather

Production losses in Argentina could keep beans buoyant short-term. But regardless of how the details play out, it’s getting late for a complete and utter weather wreck in that country.

Not to say soybean futures won’t rally. Just that if they do, they’ll probably need other factors and forces to drive them, over and above the weather in Argentina.

And don’t forget, what will become more important within a few months is the US crop. World buyers have gotten used to one big crop after another in both hemispheres. Buyers are feeding on what seems like a never-ending supply wave. Interrupt that trend with weather-slashed yields in the US and you’ve got a real game changer.