“Private analytics firm Informa Economics expects US farmers to plant more acres to corn and wheat and fewer to soybeans in 2018, according to an Informa client note.”

Soybean production is closing the gap on demand.

For the most part, soybeans have provided one of the consistently best – if not the best – cash crop option for farmers the past few years. Indeed, US soybean planted area reached a record high 89.51 million acres in 2017, up 7.2% from a year earlier and just that close to actually surpassing nationwide corn planted area.

Behind that upswing was the relative profitability in soybeans.

South American farmers have joined in the fun as well, with planted area and production up sharply over the past number of years. And even in Canada, soybean planted area has increased every year for the past decade, culminating in the 2017 crop of an estimated 8.32 million tonnes, a new all-time high. Perhaps even more telling is that soybeans are now starting to expand deeper into the Prairies, with Saskatchewan producers set to more than double their production this year to 547,000 tonnes. 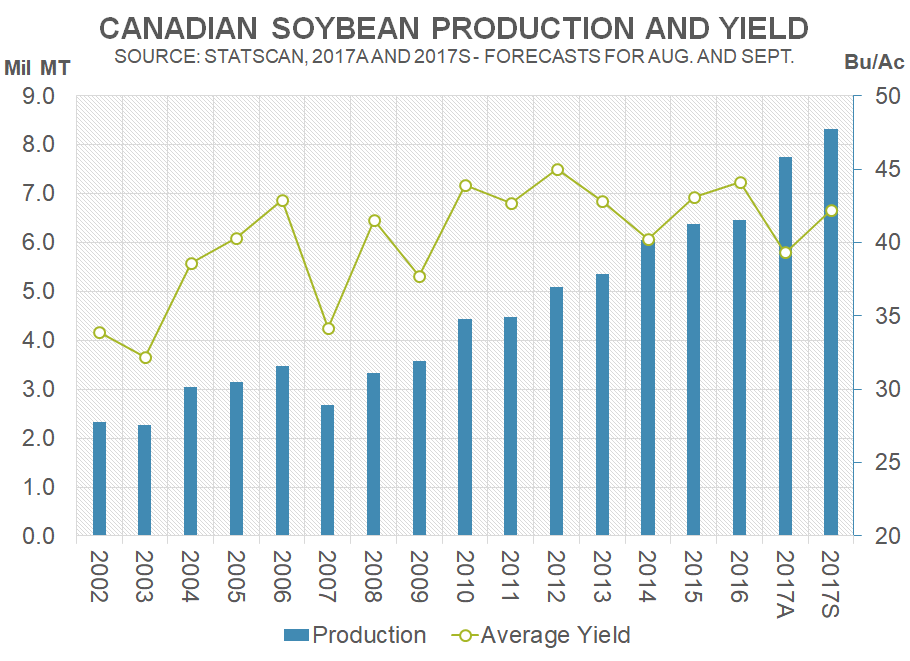 Strong demand – particularly from the world’s No. 1 buyer, China – has been the main factor in helping to keep soybean prices attractive, which in turn has driven planted area higher. For 2017-18, the USDA is predicting more of the same, with China’s soybean imports estimated at 95 million tonnes, up from 92 million and 83.23 million the previous two years.

But as good as demand has been, all that extra soybean planted area and good US yields the past couple of years is beginning to take a toll.

Right now, we’re seeing the impact of a global soybean supply that seems to be rising faster than demand. With an average yield near 50 bu/acre, US soybean ending stocks are projected to hit 475 million bu in 2017-18, up from 345 million a year earlier and well above just 197 in 2015-16. Meanwhile, the International Grains Council is projecting global 2017-18 soybean ending stocks at 41 million tonnes, down from 45 million a year earlier but still historically heavy.

Farmers good at their job

The bottom line is that when the demand is there, the world’s farmers are awfully good at meeting that need – they have proven it with soybeans. With China and other world buyers hungry, soybean production expanded into non-traditional growing areas and farmers have managed to reap higher and higher yields thanks to new and better varieties and better management.

Keep on top of all the supply-demand fundamentals that affect soybeans and other crops with our daily Ag-Alert service. Try it below for for free.

Like a full-time professional marketing consultant for your farm.