“Drought on the US northern Plains took a major bite out of the country’s flax production in 2017.”

Combined with a relatively small crop in Canada, the drop in US flax production means the North American crop is the thinnest since 2012-13.

Friday’s USDA crop production report pegged 2017 American flax output at just 97,590 tonnes, down 55.7% from a year earlier as a big reduction in the average yield – due to the overly dry weather in the primary production state of North Dakota – decimated production. 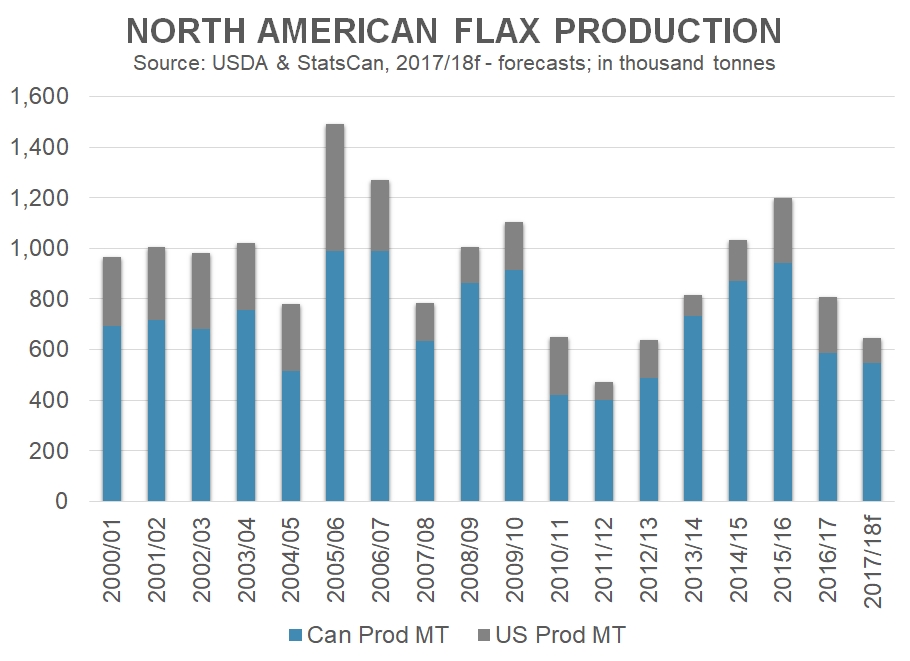 The US is a regular buyer of Canadian flax, and the unexpectedly small American crop will no doubt mean an increase in US purchases.

The law of supply and demand would suggest that as the flax supply tightens, prices should start to climb.

Still, there are a few flies in the ointment. According to Ag Canada, large world vegetable oil stocks, and steady flax production in Kazakhstan and Russia, which may steer some Chinese demand away from Canada, could limit the upside in prices.

An expected decline in Canadian pulse planted area in the spring may push more acres into flax, causing buyers to be less concerned about accumulating supplies, due to ideas about lots of supply in the fall.

On the other hand, continued dryness in the primary flax growing areas of Western Canada and the US northern Plains may offer some further support to prices.

Want to increase your chances of catching the potentially higher flax prices later this marketing year? Keep up to date on the market with our weekly Market Advisory Service.