It remains far too early for any US weather problem, but this may be something that markets become increasingly concerned about as we head toward spring.

Large portions of the Dakotas and Montana – along with areas of Western Canada – were overly dry during the 2017 growing season, something that helped send spring wheat and durum prices sharply higher. And just as those dry Prairie areas haven’t received much relief since, the No. 1 spring wheat and durum state of North Dakota has continued to struggle as well.

Nearly 60% of North Dakota remained in some form of drought as of Jan. 16, up from just over one-third three months ago and 0% at this time a year ago. Similarly, just over half of South Dakota, another important spring wheat production state, was mired in drought as of mid-January.

Of course, spring rain will be a much more important factor than winter snow in determining just what kind of moisture will be available to producers for planting in the spring, but dryness now will limit the spring runoff.

Looking farther south, dry conditions are even more pronounced. As shown on the map below, an area of extreme drought currently resides along the border between southern Kansas and northern Oklahoma. That area only accounts for about 4% of Kansas, but that’s up from 1.5% just a week earlier and is something to keep an eye on.

Indeed, the dryness on the southern Plains remains a supportive background factor for wheat, although you can expect that to come more forcefully to the forefront if the weather remains dry through until late February/early March, when winter wheat crops in Kansas and Oklahoma begin to break dormancy.

Any dry weather concerns on the southern Plains could also be amplified in the wake of the frigid conditions in early January that are thought to have caused significant winterkill.

It is worth noting too, the prime corn and soybean state of Iowa is trending increasingly dry as well. In fact, almost 75% of the state was considered abnormally dry as of Jan. 18, compared to less than 29% three months earlier and only 12.5% a year ago. That drying trend, if it holds, may lead to a quick start to spring planting, but crop concerns – and potentially prices – may begin to rise in hurry if the rain continues to stay away in June. 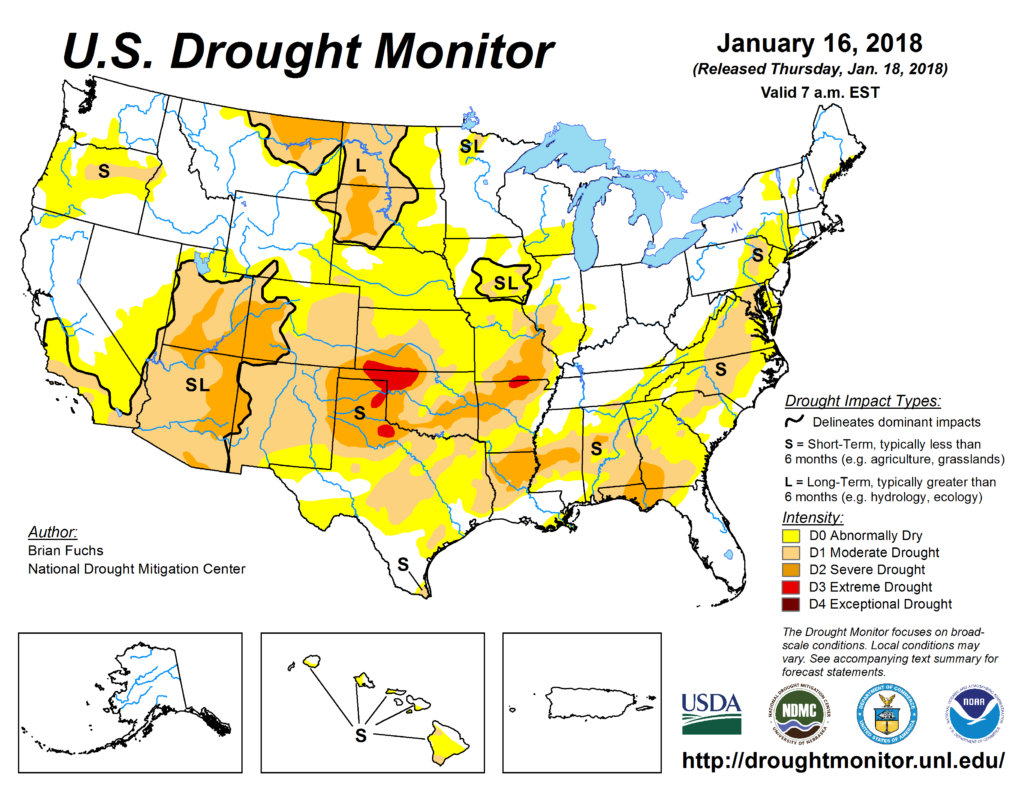 The weather is notoriously fickle, but with a La Nina event in place, most forecasters are suggesting conditions will likely remain drier than usual in the southern US – bad news for winter wheat crops. However, so far at least, predictions for a generally snowier-than-average winter for the northern Plains haven’t yet materialized.

To keep on top of all the weather-related news, try out our Ontario and Prairie morning reports.