Land values are joined at the hip with producer returns so the fact prices for mainstream crops such as wheat, corn, soybeans and canola are well down from their highs of 2008 and 2012-13 mean farmland value gains had to follow suit – eventually. (Nationwide farmland values saw their sharpest increase in 2013, jumping an average of 22.1%).

Still, it’s interesting that values are continuing to increase at all, considering how far they already climbed in recent years.

The continued strength can be at least partially attributed to a weak Canadian dollar, which has helped prop up producer returns on this side of the border compared to the U.S. Indeed, U.S. farm income is forecast to fall 8.7% to US$62.3 billion in 2017, while FCC Chief Economist J.P. Gervais said he expects Canadian farm income to hold mostly steady this year.

Weather will be another important factor in farmland values moving forward, as last year’s overly wet conditions in parts of Western Canada, and the resulting yield and quality impact, did pressure land values in some cases, resulting in more modest gains.

And then another big factor: Interest rates. Any increase in the cost of borrowing will trickle down to cool land demand.

“The Canadian dollar will weaken in the coming months, as the Federal Reserve is expected to continue increasing rates while the Bank of Canada is bound to stay put, according to the currency’s highest-ranked forecasters.”

Nobody can really tell the future, but if the forecasters are correct on this one, it would be generally good news for Canadian producers – not so much for cross-border shoppers.

Since many of the farm commodities produced in Canada, including livestock, are sold in U.S. dollars, a weaker loonie puts more money into the pockets of domestic producers when those American dollars are converted back to Canadian. So even if corn, soybean, cattle and other such prices remain weak in 2017-18, as they are largely expected to do, Canadian farmers should do relatively better financially than their American counterparts. 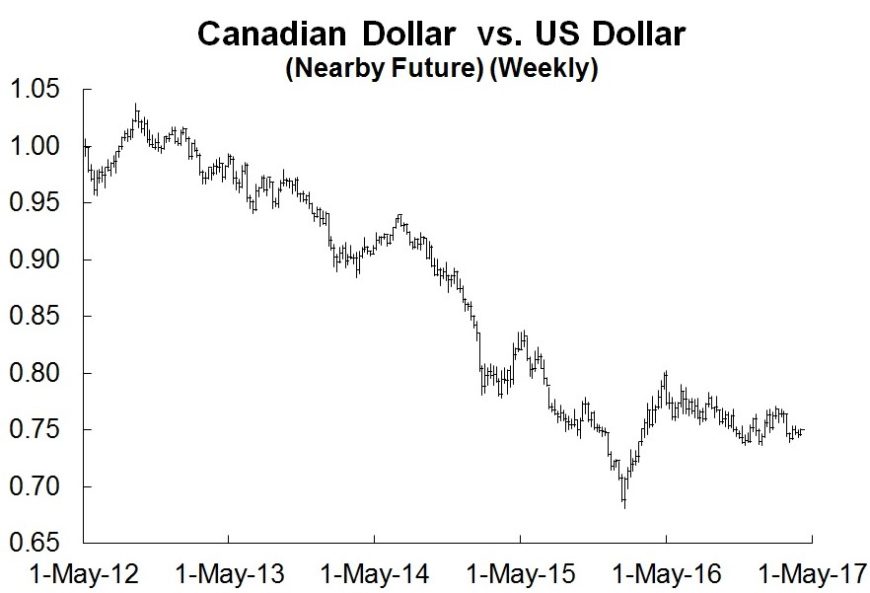 The Canadian dollar has been trending generally lower against the US dollar since 2012.

This has provided an important tailwind for Canadian farm prices and profits relative to those seen south of the border.

Really though, one has to wonder if the forecast for more weakness will come through. Truth is, a lot of variables and developments could conceivably make it dead wrong.

The DePutter team watches for tips from the charts, market tone and bullish/bearish sentiment for tip-offs. You can get our analysis via Ag-Alert (for the east), DePutter Market Advisory Service (west) and Interest Rate Alert (for viewers nationwide)