In the wake of the growth that has already taken place, the cyclic expansion of the American beef herd is now starting to slow. This is right on schedule. It was predictable.

As many beef producers already know, the total number of US cattle and calves dropped to the lowest point in 63 years at the end of 2013, whittled down by a combination of soaring feedgrain prices, a weak cattle market, a multi-year southern Plains drought that decimated pastures and forced many ranchers in the big cattle production states of Texas, Oklahoma and Kansas to sell off their herds… not to mention a reluctance among young people to embrace the ranching lifestyle and cow-calf business.

Of course, that period of liquidation eventually set the stage for the bull market of 2014, when tightening cattle supplies forced prices to new record highs. Amid much stronger market prices – and in addition to declining feedgrain prices and wetter conditions on the southern Plains –  producers started expanding their herds again in late 2014 and 2015, a process that has been ongoing ever since.

During the past 40 years, US beef herd expansion phases have lasted between three and six years. Today, right on schedule, there is evidence now the current expansion phase is at least beginning to slow, if not reverse. 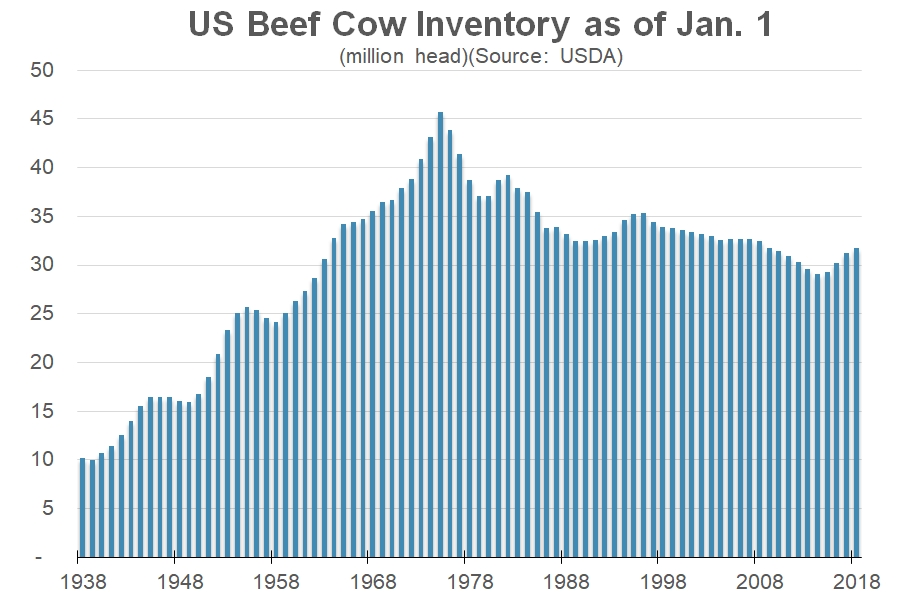 Late last month, the USDA’s semi-annual cattle inventory pegged the total number of cows and calves in the US as of as of Jan. 1 at 94.4 million. That’s still a 1% increase from the 93.7 million head counted a year earlier but does represent a slower rate of gain than seen over the previous two years. The number of beef cows as of Jan. 1 showed a similar trend, coming in at 31.7 million head, up 2% from a year ago, versus a 3% year-over-year increase for Jan. 1, 2017.

But perhaps most tellingly, the inventory report put the number of beef replacement heifer as of Jan. 1 at 6.13 million head, down 4% from a year ago – a sign that more of those heifers are now headed to market, rather than being held back for breeding and expansion purposes.

Make no mistake, US beef supplies are heavy and will remain so for the time being. Indeed, the USDA’s Jan. 12, 2018 supply-demand update pegged total expected beef production for 2018 at 27.76 billion lbs, up from 27.59 billion in December and about 6% above estimated 2017 beef output.

Those heavy supplies put the onus on demand to keep pace, and with exports going strong and domestic consumption rising, so far so good.

However, the slowing rate of herd expansion points to a possible decline in beef production within two to three years. And although that’s a long way out on the horizon, it might bode well for prices in that general timeframe.

A reliable cycle: get the latest!

The age-old cycle involving cattle herd liquidation and expansion is alive and well.

The DePutter company is putting together a Special Report updating members on the current stage of this cycle. The report also updates you on the primary hog cycle.

If you sign up to the DePutter Market Advisory (western service) or Ag-Alert (for Ontario & east), your trial subscription will include this Special Report.

(No charge, no obligation for 3 weeks – you get our regular reports PLUS our report on Livestock Cycles, PLUS a just released report on Grain and Oilseed Cycles!)

Like a full-time professional marketing consultant for your farm.