That’s how National Geographic described the Netherlands in a September 2017 article highlighting the nation’s agriculture and food prowess.

Holland’s agricultural strength — including world-leading science, engineering and innovation — is nothing new.

It was evident way back in the 1400s through 1800s when engineering feats hundreds of years ahead of their time were accomplished. Thousands of polders — low-lying tracts of land protected by dikes — were created, with massive windmills built to pump out the water. The end result was thousands of acres of new farmland below sea level, gradually changing the map of the Netherlands as the centuries progressed through the 1900s.

The hallmarks of that innovation live on. Today, the country is one of the world’s top agricultural producers.

Incredibly, the Netherlands actually ranks second in the world in terms of total value of agricultural output, trailing only the United States, which has 270 times its land mass.

Canada is no slouch on the world agriculture export stage — no question there. We achieved the world’s fifth-highest export values in 2016, according to a recent Ag Canada report.

But what might surprise you is that the Netherlands ranked above Canada in total export value. That’s amazing considering the size of the Netherlands is a mere 41,543 square kilometres. The entire country would easily fit into a small pocket of southwestern Ontario, it’s impressive.

According to a 2011 report by the CIA Factbook, the US has 1,652,000 million square km of arable land, Canada has 469,000 and the Netherlands 12,367. What’s more impressive, Netherlands makes room for about 17 million people squeezed into the relatively small land base.

Dutch agriculture is intensive and export focused. A large, modern food processing sector accounts for a significant portion of the US$78 billion-plus export value.

Feed the world? No problem!

Lots of people seem to have doubts about the ability of the world’s farmers to feed a growing global population.

But if they spent some time reading about the Dutch ag and food industry, some of those concerns might be alleviated.

Better yet, visit the country.

That’s what I did in late September/early October 2017.

While visiting relatives, I made a point to spend some time on farms and learn about the local agriculture.

I hadn’t been to Holland since 1979 and the farming then was far different than today. Here are some of my observations.

The first thing I noticed on the way out of the city of Amsterdam: a sharp division from city to countryside.

Here in Canada it can take miles to get out of cities. Gradually you work your way into the suburbs and then miles of industrial and commercial sections, gradually merging into farmland.

Not in Holland. The city boundary has a specific line. Outside the city is countryside. Farmland. No development. No urban sprawl. No commercial sprawl.

My host drew my attention to this, and I sense that it reflects the government’s visions and policies to allocate and preserve productive land for agriculture, not urbanization.

How do the Dutch punch so far above their weight?

The Netherlands creates a great deal of its agricultural wealth under glass. In other words, in greenhouses.

There are certain parts of the country with literally miles of greenhouses; hundreds of acres where temperatures, water volumes and nutrients are carefully and scientifically applied in the most efficient manner.

I didn’t tour any but saw some from the road. The recent National Geographic article* addresses Westland, the greenhouse capital, where “climate-controlled farms grow crops around the clock and in every kind of weather.”

*Go to: https://www.nationalgeographic.com/magazine/2017/09/holland-agriculture-sustainable-farming/ to read that article.

Although I didn’t get to a potato farm either, the article also talks about a potato producer who uses “driverless tractors roaming the fields and a quadcopter in the air, that provide detailed readings on soil chemistry, water content, nutrients…” to produce reliable average yields of more than 20 tons per acre, more than double the global average of about nine.

Despite the country’s small size, it’s the world’s top exporter of potatoes. Onions too. It is the second largest exporter of vegetables in terms of overall value, according to the National Geographic article.

It’s not all about greenhouses and specialty vegetables.

Other forms of agriculture, which we in Canada might call “conventional grain crop and livestock farming,” are also alive and well.

I visited a dairy farm and here’s what I saw: A typical farm in many ways, not unlike Canadian dairy operations. Situated north of Amsterdam, near the city of Hoorn, the land base for this farm was 200 hectares (just short of 500 acres). The pasture was dotted with dairy cows. 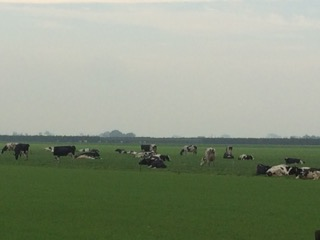 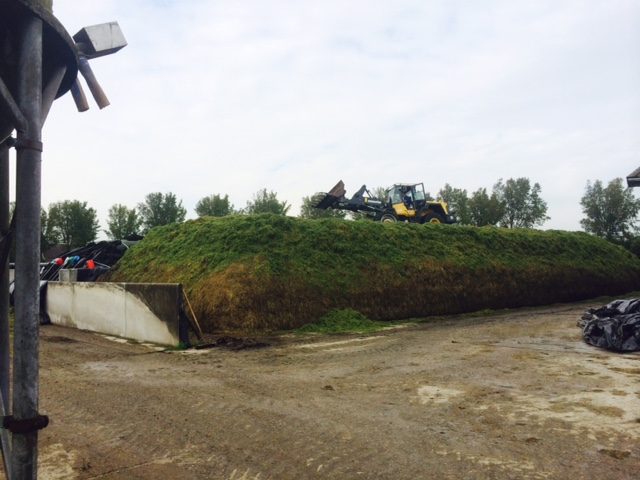 We all know farmland is expensive in Europe compared with Canada.

There are a few areas of highly valued pockets in the country where land will fetch 100,000 euros per hectare.

I also had the opportunity to visit a small farm in the province of Zeeland, near Terneuzen, where my father was raised before he immigrated to Canada as a teenager after WWI.

In this area, sugar beets are a big crop. It was harvest time. Piles of beets were seen on the ground. They were about to be trucked to processing plants. 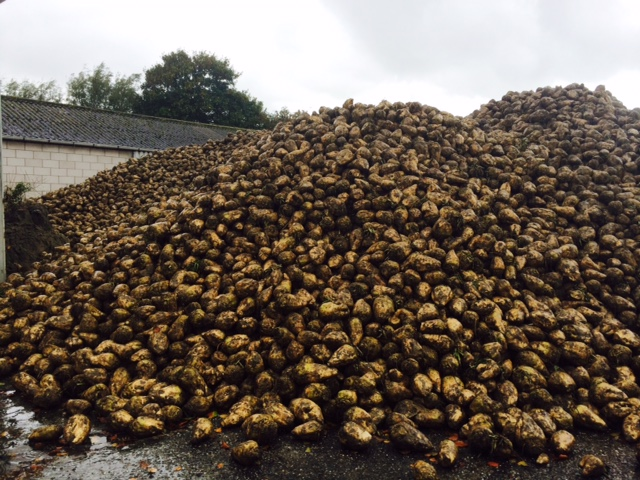 Brown beans are grown on this farm and are common in the area. The Brown bean grown here is not our Navy bean. It is yellowish-brown colour and shaped somewhat like a kidney bean.

Given the wet climate, high moisture content of 30% is sometimes the case when the beans are harvested. 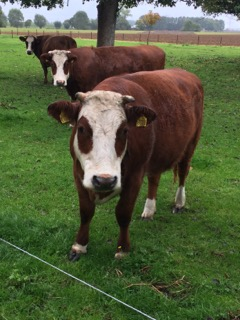 The beans on this farm were heading for a company plant called Termont Thomas, where they’ll pass through X-Ray machines to remove stones and other impurities before moving on to be packaged.

I found it interestinging that this area grows a fair bit of wheat, as does the country, but it’s mainly for feed — not milling for food use. Although yields are high, protein content is low at around 11.5%. A basic yield of 9 tonnes per hectare, about 134 bu/acre, is common for wheat.

This farm also had a few very nice looking cattle. The breed is Groninger Blaarkop. You can understand why they have the nickname “Polderpanda.”

This is just a quick blog, not a full travelogue. Certainly not a full story about Netherlands agriculture, by any means. Many readers with a Dutch history will have more knowledge and more to say.

That said, my take-away is this:

The world has immense production capacity — especially if farmers and agriculturalists are willing to learn from the Dutch.